What Will a 7000 Watt Generator Run

A Champion 7500 Watt Generator Used for Backup Power During an Outage.

Can a 7000 Watt Generator Power a House

A 7000 Watt Generator is approximately equivalent to about three 20-Amp household outlets. Of course, in a house, it is rare that anyone uses the full capacity of an outlet. It does happen, but unless you’re tripping breakers, you’re not exceeding the circuit’s capacity.

The electrical service for an average house is from 100 to 200 amps at 240 Volts. A 7000 watt generator has considerably less capacity, but that doesn’t mean it can’t get you through an outage. Some items you won’t run, others you might have enough power to run.

How to Use a Portable Generator for Backup Power

Appliances have different power requirements. Using a generator that has less power than your average home means managing the power to get the most out of it.

A small margin of 15 to 20 percent gives you a little breathing room. The margin extends the generator’s life, and its breakers won’t trip unexpectedly.

7000 Watt Generator to Home Connections Determine What it Can Power

There are three safe ways to bring power into your home.

If you’re only trying to power one or two items, like a refrigerator and a sump pump, then a couple of extension cords will do the trick. Usually, this only makes sense for a small generator powering one or two items. You probably wanted a 7000-Watt generator to run more than one or two appliances.

You could bring a multi-outlet generator cord into the house, then use more extension cords to distribute your power. This works for many people, but the cords running all over the house become a trip hazard. It’s inconvenient, takes time, and is not as safe as the third option.

With the first two options, you can’t run the furnace, central air, or any other hard-wired appliance.

A manual transfer switch with an inlet box takes power from your generator and distributes it through circuit breakers to the circuits you designated during installation. That means you can run one generator cord from the generator to a box on the outside of the house. The manual transfer switch can send power to the furnace, central air, water heater, kitchen, and wherever else you need it. It’s also efficient because it can power both 120-Volt and 240-Volt appliances. The full power of the 7000 watt generator is available to run the appliances on the circuits chosen at installation.

Generators have two capacity ratings. Running Watts or Continuous Watts, which is the most power the generator can supply continuously. Starting watts or Max watts is an extra boost of power for a few seconds to start electric motors. Household electric motors require up to three times the power to start as they do to run.

For example, the average refrigerator needs 750 watts to run, but it could up to 2100 watts to start. That’s important to remember because not only should you not exceed the running watts, you also cannot exceed the starting watts.

Also, exceeding the running watts for more than two or three seconds will trip the generator circuit breaker. That power is only available for a few seconds to get the motor started.

Each manufacturer may rate their generator to have more or less starting watts than other generators of the same running watts capacity.

Read the specifications to know both the running watts capacity and the starting watts. If you’re in the market for a dual fuel or tri-fuel model, remember that natural gas and LP Propane gas have less energy than gasoline, and therefore the generator will produce less power on those fuels.

Available Power on a 7000 Watt Generator

The formula for power is Volts x Amps = Watts. Most appliances require 120 Volts, but some need 240 Volts, others use a mix of 120 volts and 240 volts. An electric dryer is one example of an appliance that uses a mix of voltages.

For this reason, manufacturers rate generators in watts. Regardless of the mix of voltages required, the total watts are all that matters. In this way, you can connect a 120-Volt, 750 watt refrigerator and a 120/240-Volt 3000 watt electric clothes dryer.

What Will My Portable Generator Run

With a manual transfer switch, it becomes less cumbersome. During installation, the electrician balanced the circuit breakers across the load. There’s only one cord for the generator and it connects to your house to make the full power of the generator available.

Best Portable Generator for Home Use 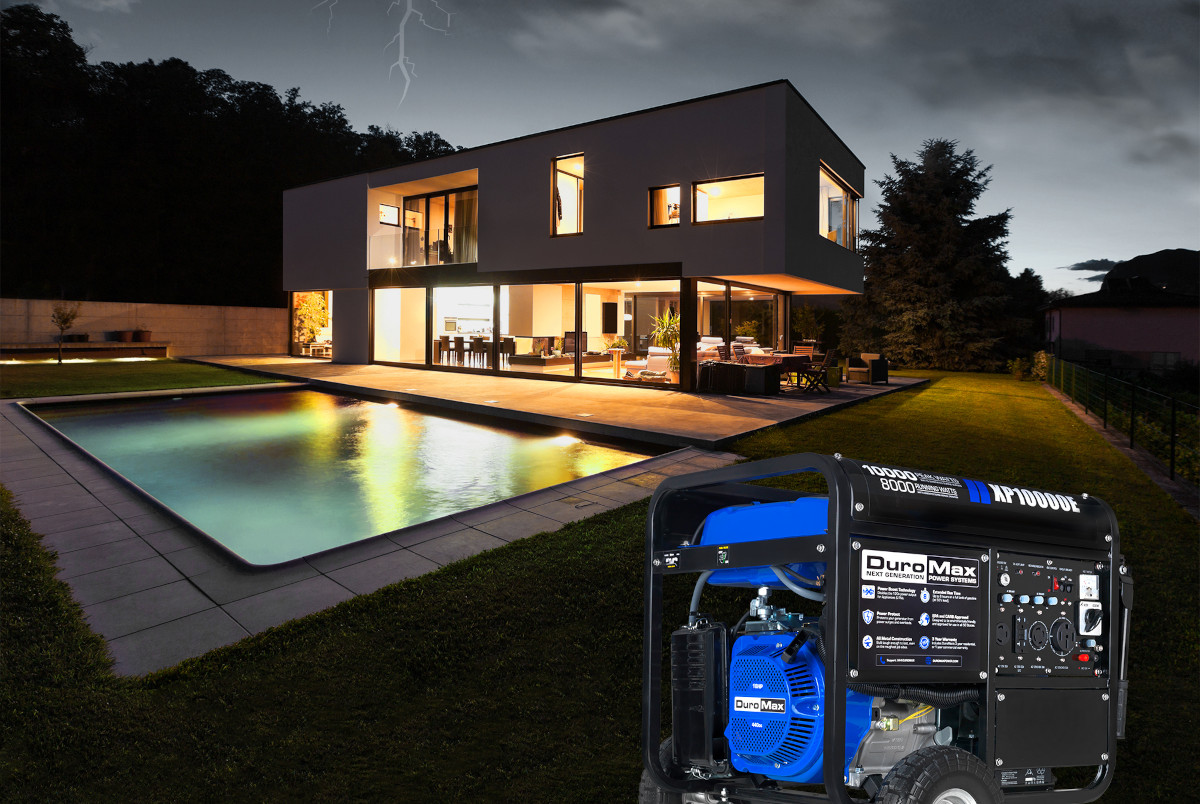 It depends mainly on the size of the central air conditioning unit and what else you want to run.

Central air conditioners use a lot of power as anyone who pays an electric bill can verify. The table below lists the approximate running watts and starting watts for the six usual sizes of central air conditioning units. Always check the appliance tag for the power required.

If you are running several appliances before you add the air conditioner, the power requirement of those appliances is called the base load. For example, a refrigerator, freezer, and ten 60-watt equivalent LED lights total 750+750+100 = a 1600 Watt base load.

Adding a 2-Ton Air Conditioner requires 7200 starting watts to start, and 2400 running watts added to the base load.

However, we can easily see that the starting watts requirement of the 3-Ton A/C and larger units exceeds the rated starting watts capacity of the generator.

The 7000 Watt generator can run an air conditioner up to two tons provided we don’t exceed a base load of approximately 1900-2000 watts. Unless you’re willing to actively manage power use, consider a larger generator to run a central air conditioner.

What Will a 7000 Watt Generator Run

The short answer—almost anything in your house with exception of the electric range and 3-ton or larger central air conditioners.

It won’t run everything at once, but with judicial power use, a 7000 watt generator can run your most important appliances, including refrigerator, freezer, sump pump, microwave, medical devices, internet connection, television, and window air conditioners.

Remember that the starting watts of some appliances, along with the frequency with which they power on an off, will affect how many appliances you can run at the same time.

How to Prepare for a Power Outage

Start appliances in sequence instead of all at once in order to avoid overloading the generator with their starting watts. This is easy with a transfer switch.

No comments to show.